LB and ‘diagnosis’. Well that was a winding old road, with a few false starts (and ultimately a dead end). I knew there was something up from the first couple of months. He was way, way too good. So good (undemanding, placid, cheerful, smiley and happy to just watch everyone) but every so often, he would have random outbursts in which he was inconsolable. I used to ask friends if they thought there was anything different about him but it was always a giant ‘NOOOOOOO.  Don’t be daft’… But I knew. 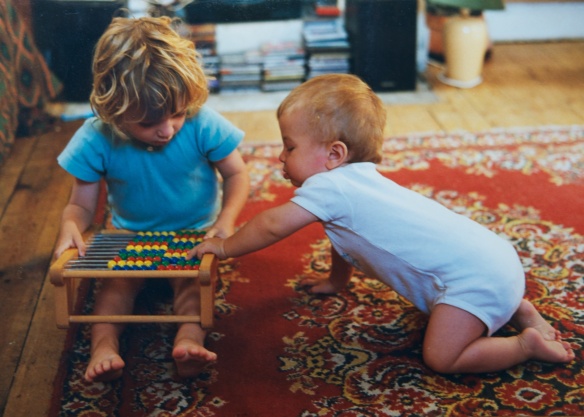 At his 3 month check, in Jan ’95, the Health visitor wrote “A normal boy” across his record book.  Hilarious looking back now. What does that mean? A normal boy?  Anyway, a year later, after no milestones, other than sitting up and smiling, had been reached, I persuaded the GP to refer him to a paediatrician.  Super speedy appointment as Dr Crap laughed us out of his office, insisting that LB’s development was within normal limits.  “Phewee,” I thought, “Docs given him the all clear..”

Not for long. Eight weeks later, LB managed to spectacularly fail his 18 month check up. “Delayed motor milestones AND delayed language development”, stated the Health visitor, tipping us into the world of disability, confusion, misery, mayhem and a helluva lot of shite.

Investigations into the delay followed. Appointments, waiting for appointments, filling in forms, listening to fluff about global development delay and socialisation difficulties. I started to sniff around for some answers myself and, after a bit of reading, decided Fragile X looked tasty. I went to the GP and demanded a blood test.  The doc was a bit snifty about it (‘wait for the experts, you pushy mum loser’, was written over his face). He agreed but said I had to take the sample to the hospital myself.  Well there’s a walk that sticks in my mind; across the park, pushing a silent but cute LB in his pushchair, with blood vials in a Co-op placcy bag swinging from the handle. Nice.

In a rocking example of doctor patient interaction, the GP rang, just before Christmas to say the good news was, no Fragile X. The bad news; it was Klinefelter syndrome. LB had an extra X chromosome in a mosaic form (ie., 30% of cells checked had an extra X, the rest didn’t) that can cause learning disabilities.  Thanks doc! Maybe sign up for a ‘breaking bad news’ refresher course, eh?

Unfortunately, the pain was not over.  A yearly, mandatory, week long assessment at a paediatric centre was the order of some comedian, up to the age of five. A week of stress, discomfort, tedium, anger and irritation as prof after prof poked, prodded, tested and questioned LB. Finishing with a conference where the profs sat in a circle and took turns to express their expertise in the shape of judgement on LB’s deficits and shortcomings. A few more labels added to the pot, autism and global delay, but fuck all else. Prognosis; waste of space, he’ll always be disabled, get on with your lives, we’ll try and sort out some sort of shite support.

Yep, a fair amount of job creation going on there, if you ask me.  With the benefit of hindsight, there was little point in any of the above. The extra chromosome has helped to access allowances, etc, without too much difficulty because you can’t argue with a scientific discovery, but little else.

The medicalisation of this whole process is problematic. You sort of need a diagnosis to provide an explanation (or confirmation) for difference, but the diagnosis(es) itself, in LB’s case, has been meaningless. The power of the endless medics we’ve seen, to dictate time, place and obedience to whatever they decide to say, is fair enough if the outcome is something positive.  Something helpful.  But dredging my memory, I can’t think of anything related to any of the health professionals we’ve seen that has made a qualitative difference to LB’s life.

He’s a different dude, who was always going to develop in a particular way, regardless of all the appointments we’ve had.  There is no ‘treatment’ and no effective support.  Just fluff and nonsense.

6 thoughts on “History of a diagnosis (es)”