I got to thinking this week that I really need to seriously declutter.  Instead of farting around, producing tiny wins and pretty pictures, I had to confront the big stuff.

Today, I started with our bedroom.

I began determined and fairly cheerful. Applying myself to the task doggedly. I pulled bags of stuff off the top of the wardrobe, down the side of the wardrobe, in the wardrobe and under the wardrobe. I pulled out all the stuff from under the bed, around the bed, on the bed. I went through all my clothes and tried (and largely failed) to apply the two year rule. Just like in our house the five second rule, when you drop something, is really about 2 minutes (unless the dogs get it), the two year rule is really more like the 7 or 8 year rule. But I was harsh.

I carried piles of Richy’s clothes from under the bed into the living room where he was working and went through each item.  With some success.  I went through numerous old bags, carrier bags, computer cases and handbags, emptying out receipts, paperwork, old cheque cards, lip balm, stamps, pens, memory sticks, tickets and so on.  Some of these dated as far back as 2001.  I filled two bin bags with rubbish and eventually bagged up 10 large bags for the charity shop.

So here is some of the haul (without the severely dusty stuff or the rubbish); 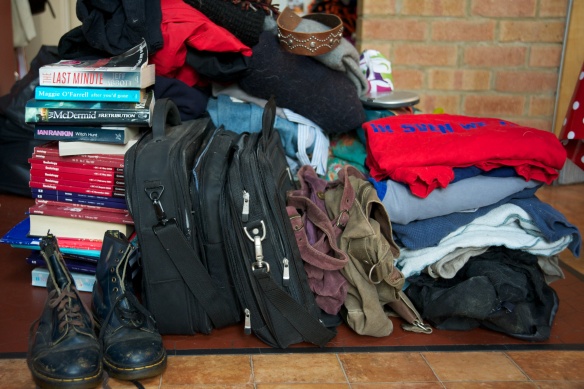 The computer cases were a bit of a chuckle. Built to carry laptops the size of small houses.  The ‘In Sven we trust‘ footy shirt brought back a few memories of the 2002 (?) world cup. It had a button in the top pocket that played the theme tune from The Great Escape. I pressed it, nostalgically, but it just made a high pitched whirring noise that wouldn’t stop.  Reflecting England (and Sven’s) performance really.

My old Docs were in the discard pile, sadly. They saw me through my undergraduate and postgraduate studies up to five years ago. Suspect my Doc days are over.

There was a disc Walkman 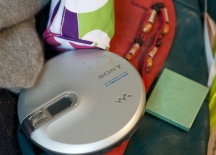 which seems hilarious now. Did we really carry round cds to play? And in amongst the old novels were several years of old journals going back to the late 1990’s.  Again, with electronic copies instantly available, keeping them seemed pointless. 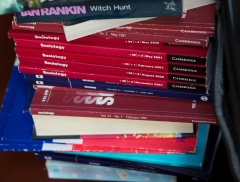 So. It’s all gone. The kids carried the bags across the road to the charity shop.  ‘A good days work you old scum bucket’, I hear you mutter. Maybe. But I feel weirdly morose and a bit sad.  I think I’ll save the rest of the house for another year.