Tomorrow we have a meeting with the Mazars who have been commissioned by NHS England to undertake the review into all deaths in Sloven mental health and learning disability provision since 2011.

It’s probably worth flagging up some of the CIPOLD findings because they are so off the scale shocking. On average learning disabled women die 20 years sooner, and men 13 years sooner, than the general population. 22% of the sample were under 50 when they died.

Astonishing statistics. And then this:

Despite 43% of the deaths being unexpected, they were nearly 10% less likely to be reported to the coroner. Wow. Howl.

A bit of historical context

I suppose it ain’t rocket science to work out why learning disabled people die earlier or why their deaths seem to be of less consequence than the deaths of others. In 1952, A.F.Tredgold wrote this in his cheerily named Handbook of Mental Deficiency  only a few years after the end of WW2; 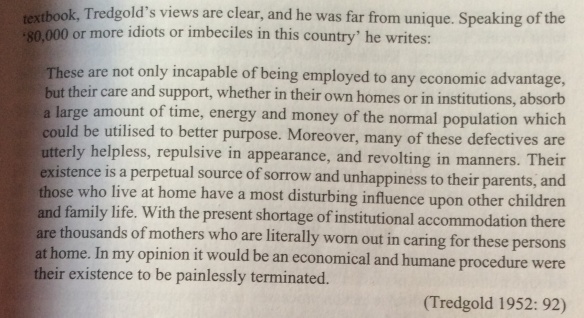 Forty years earlier, University College London set up a Laboratory of National Eugenics part funded by Francis Galton. Galton, who coined the term eugenics, wasn’t alone in his concern about the ‘feebleminded’ breeding like rabbits and decimating national fitness. A genuine fear of gene pool dilution (Wellcome have a fab digi-archive of The Eugenics Society documents which are kind of breathtaking). It was an influential movement for some time (and arguably still is, albeit less explicitly with that pesky term carefully hidden behind layers of more ‘acceptable’ language) involving a range of public figures including Beatrice and Sidney Webb, HG Wells, William Beveridge, George Bernard Shaw and John Maynard Keynes.

We’ve never really moved beyond this perception of learning disabled people as deficient, worthless, burdensome and a problem. Despite a steady stream of policy making and legislative change. It doesn’t matter that there are small pockets of brilliance dotted about the country if most learning disabled people lead constrained, contained and impoverished lives. Waiting for an inevitably premature death. With little accountability. And no imagined future.

So. A meeting tomorrow with the Mazars. Maybe another step forwards in making visible (unconscious?) practices that demonstrate the dismissal of some lives as relevant or human.

Leading to meaningful change? Nah. Why would it?

14 thoughts on “Meeting the Mazars”