Another remarkable letter today from the Sloven Board Chair (who I’m now beginning to think might be deluded). We’re still thrashing through various issues around Sloven’s behaviour since LB died. Real scum bucket behaviour. Perhaps not surprising really given the Kirkup report this week that details shockingly awful actions in another NHS “Trust”. We’re clearly a way away from candour, honesty and transparency. Despite all the blather.

So. One part of the letter was about social media surveillance. Mr Waugh states

Like many organisations, the Trust monitors media and social media mention of its name, hence the content of the briefing to which you refer. This does not constitute surveillance of an individual.

Ok. Not sure the monitor/surveillance distinction is holding up here. I blogged about this issue a while back but a screen grab is helpful for a quick glance. Yep. Clearly monitoring. The blog written by the mother. An individual. A specific and targeted close observation (particularly given we rarely mention the Trust by name (unless it is now actually called Sloven)). 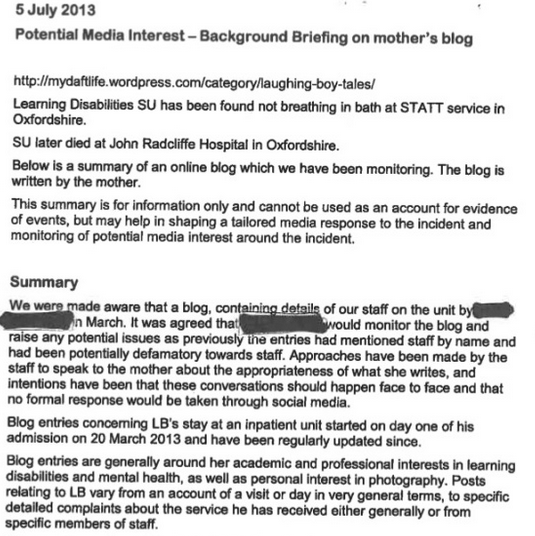 This briefing was written and circulated one day after LB died. [He died?] How the Board Chair of a public body can continue to be so deceitful and underhand to the family of a child they let drown in the bath is unfathomable. You were monitoring/surveilling my social media activity and it was more important to your organisation to think about reputation protection, less than a day after our son died, than seriously look at the service being provided in the STATT unit.

How can this level of dishonesty and immoral action possibly be allowed to continue?

6 thoughts on “Monitor lizards at the Sloven Corral”