Tim Smart made his judgement about the Sloven board on Thursday morning: 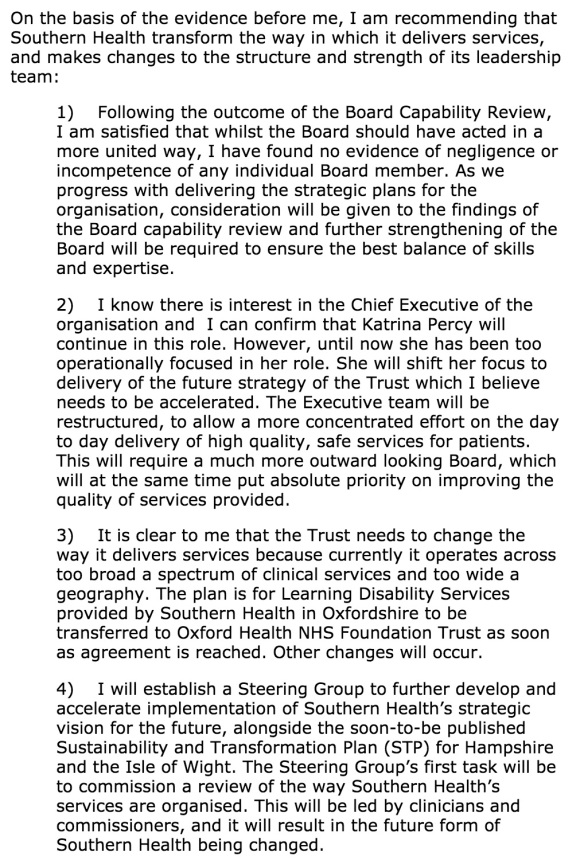 Graham Shaw managed to summarise this statement in less than 140 characters shortly after it was published.

Needless to say there have been tears, rage, disbelief, frustration and utter bafflement in the Justice shed. Richard West produced a powerful statement on behalf of families and patients (drafted in the early hours of Thursday after we’d pretty much worked out that KP was not going) summarising key failings and articulating our collective incredulity. [The decision to transfer Oxfordshire provision to Oxford Health was made months ago…]

In a (farcical?) twist, Smart arranged to meet some families with Alistair Burt just before his statement was published on Thursday. Their response (with evidence of contemptuous Sloven behaviour) surprised him and he said he needed to think further/hear more. This explains Alistair Burt’s statement on local news that the issue of Sloven governance wasn’t concluded.

I’ve got a lot of time for Alistair Burt (and never thought I’d say that about a Tory MP). Here he is, a few weeks ago, at the extraordinary Sloven debate at Westminster House:

On Wednesday, the day before Smart’s announcement, the inquest into the death of another young woman in Sloven’s care was held. The coroner reinforced Alistair Burt’s concerns as lack of communication, ignored care plans and records changed retrospectively were revealed. Again. Lesley Stevens, in her full time role of attending inquests and producing worn out platitudes dropped the ‘lessons learned’ crap this time. That ship has well and truly sailed. Sadly, and incomprehensibly, the Sloven CEO was not on it.

I think many of us disagree that ‘the right person is (was?) in place’. Smart, for whatever reasons, failed inexorably to cut effectively through Sloven murkiness. Despite the clear evidence trail laid out for him online. An example of the dangers of crusty (and arrogant?) senior bods dismissing social media without having more tech savvy colleagues provide them with a summary of what has gone before. Or perhaps Smart knew and chose to ignore this beyond damning evidence. After all, he pulled me up on the language I use on this blog when I met him.

I can tell you, Mr Burt, (and I know you heard this in the meeting on Thursday morning) the (non) actions taken by Tim Smart have not gained the confidence of people. Quite the opposite. And there seems to be little quality in the actions he’s taken. We’re left asking how and why the person ‘leading’ an organisation that cannot keep certain patients safe (while her focus has apparently been overly focused on operations) remains in post? Despite demonstrating no understanding of patient care, humanity and appallingly little competence stretching back over four years (and possibly longer).

I could pepper this post with swears. My brain has swears careening around it at the speed of sound. Rich and I have become even more randomly sweary since Thursday morning. If that’s possible. But I won’t. Instead I’ll leave you with a photo of a Playmobile figure I dug up in the garden earlier. LB died three years ago on Monday.