So, the Sloven non-executive directors are no more. The interim Board Chair, Alan Yates, published the news earlier. He had the decency to let us know in advance which we appreciate. He’s also clearly got some sense getting shot of them. Though really you couldn’t get much more of a “fuck me, this bunch of muppets are utterly clueless” situ. Just look at the very potted timeline, the BBC pulled together:

The failings drag back to 2011 when the Trust gained Foundation Trust status, and have been well documented since then. A shedload of public dosh has also been spent on repeatedly reviewing the Trust governance. Simply shameful. Here’s hoping some of the remaining execs follow suit sharpish.

In other news, the National Quality Board guidance, an outcome of the CQC Deaths Review, was published yesterday. More guidance. Drenched in typical ‘guidance’ statements like; To ensure objectivity, case record reviews should wherever possible be conducted by clinicians other than those directly involved in the care of the deceased.

I should start walking more again and give up booze and chocolate. We should keep the house cleaner. Of course case record reviews shouldn’t include the involved clinician. Seriously. Is this how far we’ve come?

New principles for engaging with bereaved families are included in the review, handily provided in a box on p15. Eight bullet points and 7 ‘shoulds‘. I remain so blinking relieved and delighted that #JusticeforLB has been an explosion of colour, fun, joy, beauty and brilliance. A tonic to offset the utter banality and mediocrity of official responses to scandalous practices…

As part of the CQC Deaths Review spillage, there’s a swanky ‘Learning from Deaths Day’ arranged next week. In a move that both exemplifies a) the complete lack of understanding (still) of what needs to change by those who should know so much better, and b) the disconnect that exists between the different silos of NHS England, CQC, NHS Improvement and the like, this day was originally closed to families. I know. (Almost) cue the old, eye leaking emoji…

“Eh? What was that Jezza? Sorry, stumbling on bullet point One right now. Here’s a reminder in case you’ve forgotten (or not been told): ‘Bereaved families and carers should be treated as equal partners following a bereavement..’ Oh and bullet 8: ‘Bereaved families and carers who have experienced the investigation process should be supported to work in partnership with Trusts‘…”

You couldn’t make it up really. Just words. Put together in a report like shape. Same old words, same old order. Like browning blossom falling onto the damp ground below. Soon to disappear and be forgotten about until the following spring when new versions of the same appear.

With some agitation by various people, including George Julian and Neil Churchill of NHS England, families were eventually allowed to attend this day which is organised as a typical NHS exercise in heartsink pomp and ceremony. Swerving the opportunity for a humane, passionate, critical, efficient, collective and effective response to a scandal that obviously demands alternative and innovative responses, the same old turgid suspects are lined up to talk the same old, same old talk. Durkin, Richards, Mackey, Hunt and more Durkin. The 7.5 hour gig includes 10 minutes of a family member, an hour of scheduled discussion and 20 mins of Q&A. 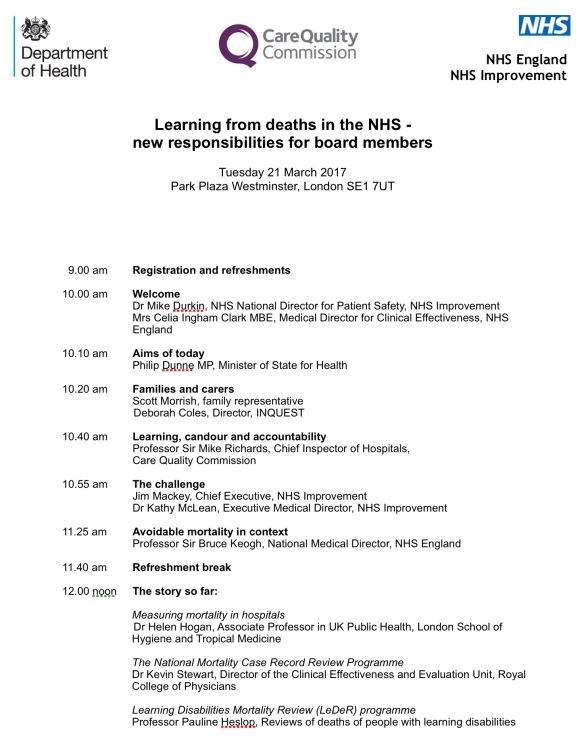 We could probably write the script of the day now and save £££s. Not only in the laying on of the event but the time taken out of attendees’ everyday lives. I feel so sad that the brilliant and groundbreaking work of the Mazars team is being dragged down into this well trodden, hierarchical, tedious and mediocre NHS furrow. There was a moment, back at the end of 2015, early 2016, when actual change seemed possible.

Instead, it’s business as usual and a shedload more shoulds.

Postscript: Had a timely reminder via Twitter as I pressed publish that we have held the Sloven board to account (a CEO, 3 Board Chairs and 5 NEDs so far.) Yep. We bloody well did. Cracking work #JusticeforLB and continued drops of brilliance.

8 thoughts on “A cull and a shedload of ‘shoulds’”