LB’s five year ‘death anniversary’ is slowly, oh so slowly, approaching. A now familiar tangle of dread, sadness, unexpected tears, and more sadness. With a sort of ‘five year’ incomprehensible label slapped on it. I’ve been snappy, irritable, weary, overwhelmed by the enormity of it all. Sad. So fucking sad. Tomorrow is five years to the day I last saw LB alive. I’ve been obsessively counting back for the last couple of weeks. Dipping into my blog to see the slow denouement captured in what was ‘real’ time at the time.

I’ve learned that death anniversary distractions are important, and almost impossible to identify in advance.

On Saturday I had a meeting with the INQUEST Family Reference Group to talk about a new photography project they’re plotting. It was held in Lauderdale House, Highgate. I caught the Oxford Tube to London in the morning, reflecting on past journeys with LB (all hilarious). I functionally picked and plotted my way across London using a combination of Google Maps and my Oyster card. Hot, hot and hotter. Notting Hill to Tottenham Court. Out of the Northern Line steam bake to brilliant sunshine at Archway. The 20 summat bus up Highgate Hill.

I got off in one of those ‘drops of paradise’ spaces that exist in pockets around London. A beautiful, old white house on the edge of Waterlow Park. Parkland, lakes, a wild meadow, dips, low hills and easy like summer sunshine activity. BBQs, blankets, bunting and laughter.

The meeting was productive, moving and over (for me) by early afternoon. Walking back to the station I suddenly wondered how close Highgate Cemetery was. A cheeky Google in the shade showed it was a mile diagonally across the park.

Highgate Cemetery. Two sites divided by a road. The West side was guided tour only. The tour was about to start. 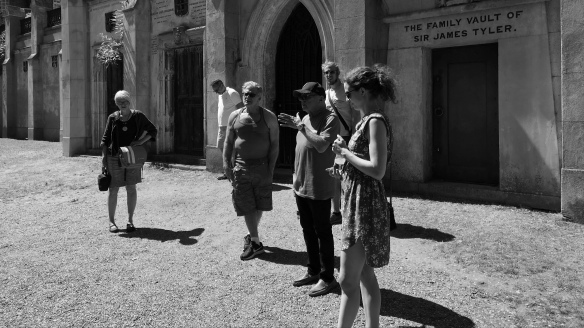 The next 70 mins was an exemplar in grief anniversary distraction. Stunning, idiosyncratic, unexpected, mystical, and enormous. Deliciously cool, green and death related. I devoured names, dates and stories on gravestones and learned various death nuggets.

After the tour I wandered round the more tamed east side of the cemetery, clocked Marx’s tomb and others before heading home. Distraction job unexpectedly and brilliantly sorted.

We’ve got a velux window above the sink in the kitchen which has hosted a false black widow spider (FBWS) for weeks, maybe months, now. High up in the corner. Balanced with kick ass authority in a tangled, sort of mussy looking cotton wool web set up. We’ve discussed this spider with vague concern (me and Tom) while it’s grown chunkier.

I’m not a close up spider fan. I regularly peer up to make sure it’s showing no dropping down signs when I’m at the sink.

This afternoon a small party of flies and one if those look-alikey wasp things were mashing it up in the window space. At one point the wasp flew directly into FBWS corner.

‘Christ’, I thought grimly, ‘game over’. After a determined shake with some sass, it pinged free and bounced to the other side of the window.

I got the mop handle. This wasp deserved to live. Within seconds, I’d opened the window and it flew free. I went back to the kitchen table to chop some lettuce and felt the lightest tickle my neck. Yelp (yep), flick and leg it to the living room to tell Rich. Let’s just say he was underwhelmed.

I returned to the chopping board.

Movement on the tea towel on the bench below caught my eye. The spectacular, shiny, brilliantly skull decorated FBWS.

I did a mangled scream/shout/’oh my fucking god’ holler combo [I know]. Rich immediately captured the spider in a plastic cup and took it outside.

“Are you sure you got it?!” I asked, “I mean how the hell did it get across the kitchen like that? Did it… [shudder] jump?”

“You do know it’s nearly the end of one of the most exciting World Cup matches so far..?” he replied.

3 thoughts on “A death anniversary distraction. In two Acts.”