Now, for the purposes of this post, I’m substituting Laughing boy’s surname (which happens to be an endangered species) for Llama. And, I’m pretending that llama’s are an endangered species. When I told some mates this story on the bus a few weeks ago, I laughed so much I could barely speak.  They didn’t. 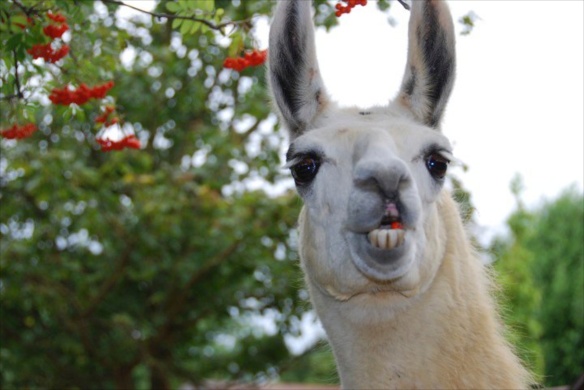 Ok. So… back to the beginning. Early evening, the other week, there was a knock at the door. I was working at the kitchen table, the dogs went crazy as usual and Richy Rich came into the room with bouncy puppy of a man in his twenties wearing a fluorescent tabard. He was all smiles, chubbiness and excitement.  He worked for the World Wildlife Fund and was cold calling for dosh.  Turns out the WWF had dumped a gang of these pups in our area, all with clipboards and a mission; save the animals.

Richy had tried to give him some cash at the front door but the WWF insist on direct debits (of course). They sat down together and I half listened as bouncy puppy got more and more excited about saving animals, the work of the WWF, but also the fact that he’d done his degree at the university Richy works at.  And he used to live round the corner to us. The enthusiasm was infectious and filled the kitchen to bursting point. When the final form was signed, Richy leapt up and announced “I’m off to hug a tree now!!!”  Pup looked momentarily surprised then leapt up beside him and shouted really loudly “I’m going to bag myself a llama!!!”  As if by magic, LB appeared from nowhere, waiting expectantly.

Richy and I dissolved into gut wrenching, hysterical laughter. “Man, you are joking me…”, pup kept saying as he gathered his papers together and left.

Postscript: Just in case this story really isn’t funny, here is  Eddie Izzard talking about Prince Philip who used to be Head of the WWF.