Fieldwork.  Life on the road. Possibly romantic in, for example, the wide open spaces of the States. Bumbling around the UK on trains and buses, staying in typical British budget hotels, is not quite so enjoyable. Here’s a taste of one journey, a couple of years ago, and the spaces I passed through on that journey. Some a helluva lot quicker than others.

So, first the cross country sleeper, London to Aberdeen. Fun, though odd, waking at midnight and opening the blind to find we were at Crewe station.  Bit of a surreal bed/private/platform/public situ. Plus there are no cabin keys; you’re supposed to call the steward to re-open your door.  I didn’t want to bother Stew so did a quick loo dash leaving my door wedged open, hoping some thieving bastard didn’t filch my stuff.

The station at Aberdeen was a treat but arriving at 6am, tired, carrying a load of gear, feeling like a grubby-mcgrub thing with four hours to kill before the interview ain’t much fun.  Still, job done by mid afternoon, and off to Glasgow for the night.

The room lived up to the warnings; a view to die for, a manky shower in a cupboard and carpet so grimey it was slippery. 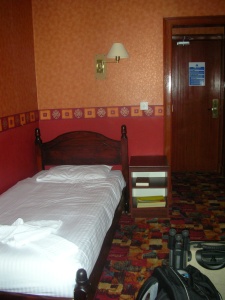 A factor I hadn’t been warned about was the Eastern European men/Glaswegian ladies of the night shagging outside my room all night. Still, after a bowl of grey, chewy porridge and watery coffee, I set off on the train for interview 2 just outside Glasgow.

Got off the train to find a railway worker running across the track shouting at me.  He was the only person in sight which, again, was a bit surreal. After a quick catch up, it turned out I was in the wrong suburb and, looking like a cash rich middle class cow, I shouldn’t hang around in this particular suburb unless I wanted to donate all my belongings (and possibly my life) to some local lowlife/s.  There was no station, just space, so I called a cab and tried to magic my daft amount of belongings (including a tripod and laptop) into an inconsequential, valueless mound while I waited, in full view of about 120 windows. The taxi driver, to underline my grave error of being in that particular space, drove me the twenty miles to the right address via the latest local fatality site.

After interview 2, the interviewee’s young brother, who had just passed his test, very kindly gave me a lift to the nearest station.  It was a short journey in terms of time taken.

Interview 3 took place in a building next to the Edinburgh Psychic College. There were some fascinating characters hanging around outside there, and I thought about exploring with them how close to danger I’d really been that morning. But I didn’t.  I did the biz and then walked back to the station in the sunshine to start the trek down south.

Then there was some beautiful Northumberland scenery, a fab night’s sleep at a Premier (Car Park) Inn, interview 4 and home.