Last night I met up with a group of friends for a bucket full of fizz, tasty nosh and a lot of fun.  We all meet up a few times a year and have done for years now.  They are a bunch of five very different, but each remarkable, women.  We became friends as our kids were enrolled in the same academy for crazy little dudes pretty much from the get go.

Over the years, an awful lot of crap stuff has come and gone, often to do with our little dudes, but other stuff too.  Real crap.  These evenings are a space to vent, moan, rant but mostly laugh.  And drink huge amounts of cava.  I fell into bed in the early hours of this morning, chuckling and remembering the summer of 2006, when we surprised Clare.

That August, Clare and her family were booked on a two week holiday to the States with family friends.  Just before they were due to fly, a terror plot ‘on an unimaginable scale’ was discovered and flights to the States were severely disrupted or cancelled.  This situation is crap for anyone planning to travel, but when you’ve got the layers of complexity that come with a disabled child, it’s unworkable.  They pulled out of the trip and headed for Looe instead, leaving their mates to (eventually) head for Florida.

That weekend, Becca rang the rest of us to say that Clare was feeling pretty low and why didn’t we all go down to Looe for the night, mid week, and surprise her.  Whoa!  Crazy suggestion with all sorts of considerations that, in this instance, were, manageable. By Wednesday lunchtime, we were booked into a B&B overlooking the town.

“Right. Where’s Clare?” we asked ourselves, heading down the hill to the town centre. We kept asking that question as Looe turned out to be a bit bigger than expected, with more than one beach and a billion tourists. 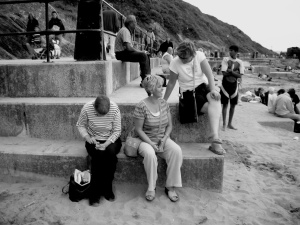 “Where the fuck is she?”

Becca texted her, asking what she was up to. “Off to the beach”, was the answer as we legged it down to the main beach. Nothing.  We looked high, we looked low, but there was no sign of em.

After discussion, and chips, Becca rang and engaged her in a conversation about what she could see right at that moment.  At the time we were worried that this bizarre questioning, together with the noisy seagulls in the background would lead to us being rumbled. AS IF?!

On her description, we legged it back up the hill to the car and drove to a nearby beach that Clare had talked about in the past. Nah. No sign. We returned to Looe and randomly scoured the busy, narrow streets optimistic that we’d see or hear their dude, who is one of life’s larger than life, natural meet and greet characters*.

Eventually, late afternoon, we chucked in the towel. Becca called Clare’s husband, said she’d come down and could he get Clare to a pub at six where she would be waiting to surprise her.

The rest is captured in this picture. 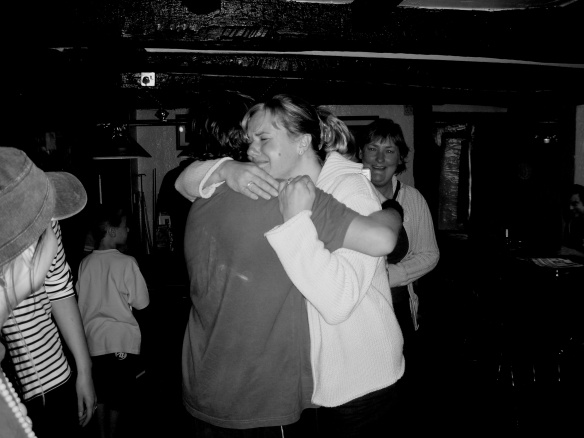 It was a good surprise.

* As evidenced by his shoulder rubbing with prime ministers and starring in the recent Co-op ad.