A year or so after we moved into our gaffe, a delivery man knocked on the door. I signed for the parcel while he looked wistfully at the house across the street.

“Ah, those were the days…,” he said, shaking his head. “Pussy Parlour. I used to deliver there every few weeks.”

“You sure?” I said, looking at the nondescript, thirties semi, that mirrored ours.

“Yeah, always trouble with the police though”.

It turned out I worked with one of the women who moved in after the demise of Pussy P. She said they had midnight callers for a good six months. The geezer who moved in next was a tasty type with a pit bull type dog that ran across the park in about three bounds.  A girlfriend appeared and a baby soon followed, but there was something odd about the set up.

“Witness protection”, I kept saying to Richy. “Think they’ve planted him, like a seed, in the middle of ordinary ‘burbs, next door to a Church of England primary school. Specially with the local colourful characters. Perfect location.” 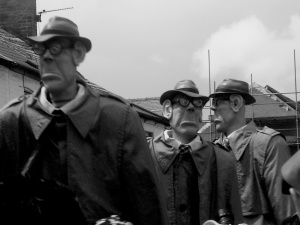 One evening, a few months later, several police vans pulled up slightly down the road. There was a lot of discussion, lots of suits sitting in cars, talking on walkie talkies, and then a couple of men, crawled along the pavement, along the fence towards the front of the house.

LB was transfixed.  I grabbed a glass of wine and sat upstairs with him for a couple of hours. Watching  police come and go, forensic types, carrying metal cases full of technical wizardry, sneaking in, spot lights installed, the road blocked and then unblocked with more vans.

“Stop beaking you two!”, shouted Richy up the stairs, every so often.  But given LB’s favourite programmes, apart from the Mighty Boosh, are UK Street Crime and Brit Cops, we were in for the duration. Live reality police drama outside his bedroom window.

When a white tent was erected in the back garden I started to think that maybe tasty geezer had been hunted down and murdered by the people he’d dobbed in.  I got ready to drag LB away.

It turned out to be a cannabis farm.