Nearly three months now. Our lives transformed into something we didn’t want. Didn’t anticipate. We’re in a space in which my/our worst fear has been realised. In horrific circumstances. LB died , aged 18, in a place we assumed was safe. An NHS setting.  A locked ‘treatment’ and ‘assessment’ unit. Four staff on duty, including ‘specialist’ learning disability nurses, and five patients, 24 hours a day.  Current discussions/reviews around patient safety in NHS settings blown out of the water here. LB had (or should have had) pretty much one-to-one care around the clock.

How the hell could he die in the bath?

This question plays over and over in my mind. Relentless and exhausting. A colleague yesterday said to me “It’s impossible to make sense of something that’s totally senseless” and I think she’s right.  But it doesn’t stop me trying. Because it shouldn’t have happened. I don’t understand how it happened. And I miss him. We miss him.

Not only are we trying (and failing) to make any sense of the totally senseless but we’re also waiting. Waiting for answers. Waiting for some sort of accountability. Waiting (hoping) for effective commitment to change. Not pointless recommendations that mean crap-all. Our remarkable son died. He lost his life. We’ve lost the lives we had. We have differently coloured lives now. Differently textured. Coated with sadness.

I doubt if many professionals involved in what has happened, and what will happen, are waiting. Those who commissioned the ‘care’ LB received. Those who managed, organised and provided the ‘care’. I don’t suppose they’re waiting. If anything, I suspect they’d probably prefer to wait forever. To avoid confronting what happened. And why. The world of learning disability health and social care seems to operate a ‘hands over the ears, ignore ignore ignore and pretend none of this exists’ approach. Supported by commissioners and higher. Learning disabled people too easily sidelined, ignored and ultimately let down.

I don’t suppose the various legal peeps representing the Trust and local authority are waiting either. It’s just a job to them. They probably don’t recognise LB as a young man who led a rich life, full of love and laughter. A dude who was so funny, so unusual, that the colour is washed out of life without him. He’s probably a ‘case’ now, a number or acronym. To be covered up or swept aside. A game. A salary.

Rich and I walked along the canal today to the cemetery. This is the sort of thing we do now, in our transformed lives. Walking, talking, rage, tears, despair, occasional laughter or hope, and utter sadness. Trying to make sense. Trying to find sense. And failing.

People are visiting LB’s grave.  A rock carved with ‘LB’, buses, flowers and a bus book carefully wrapped in a plastic bag. All left in the lush grass. Yep, I feel woodland grave pride. He has grass to be proud of. One of the few ways we can demonstrate our love and care for him.

Some of these visitors never met LB. But they care. And they feel outrage.

So why do so many of those involved in health and social care? 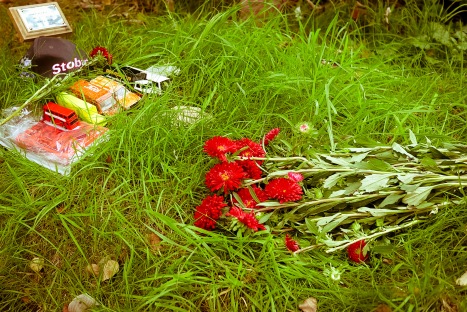 5 thoughts on “Waiting and missing”