Bit of a convoluted story tonight. Involving collecting train tickets from work and darting to the sorting office (completely crappily located outside the ring road) to pick up an important special delivery letter before attending a meeting with NHS England local team and families. In the sometimes comedic car share car. Remarkably, the traffic cleared at 7.20pm allowing me to pick up the letter with 10 mins to spare.

Eh? I thought, as I was given an enormous envelope. Important and big. I drove to the meeting, parked and opened it. Eurgh. It wasn’t the letter I was expecting. It was Part two of Sloven Candour. The mop up of missing emails mentioning me from their original trawl which found, er two.

I had a quick flick through the thick file before going in to the meeting. A sea of blackness. Literally. Seriously? 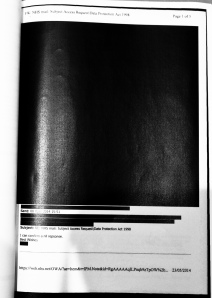 Most text has been redacted to the point of almost (not) hilarity (see above). This ‘new’ documentation is from a strangely narrow band, March – May 2014. And only people with names beginning with ‘S’ seem to avoid redaction; Sue, Sandra and me (aka ‘mum’). Well done Sue and Sandra for stepping up. Katrina Percy is only listed once. Probably by accident.

One of the rare things left un-redacted was the fact “the family” stopped “service users” attending LB’s funeral because we didn’t want staff attending. Not true. We’d asked if they could be accompanied by staff who didn’t look after LB. Staff from the other units or locum staff. Another cracking example of Sloven selectivity.

I didn’t have a chance to look at this latest [I don’t know what], when the meeting got underway. A summary:

At the same time:

I’m writing about this meeting for a few reasons. 1. Because sadly I can now. 2. Because in Oxfordshire, we seem to be at a point in which the ‘chance’ for actual change seems to be now. Attention, focus, passion and commitment to change is on full boil because shite provision has become so visible. 3. Because this ‘change’ needs documenting.

So, bring it on. Our campaign is about effective change and we’ll shout from the rooftops with delight if it happens.

In the meantime. The new blue file. Awkward, offensive, combative, vile and dishonest. Further demonstrating complete disregard for LB and us as a family. No sniff of candour, honesty and transparency. Simon Stevens, if this gets poked under your nose in the lofty heights of NHS England Tower, please step up and do something. This hideous behaviour is a form of torture. And your name begins with S.

15 thoughts on “Black is black and ‘S’ Club Sloven”