Sloven board meeting papers were published this week. Ahead of the next meeting on November 25th. (Same day as our pre-inquest review meeting). Jaw dropping nuggets. As ever. This bunch of festering toe rags never fail to deliver.

First, the off the scale of inappropriate powerpoint that surfaced a few weeks ago – Could it happen here – is actually a quality improvement toolkit. Developed in response to ‘the risk of not learning from incidents’. Yes. I know. Personally this would be enough for me to whip their licence to  operate away right now but we know there is no straightforward route to accountability.

The ‘owner’ of this risk in Sloven Towers is the aptly named Medical Director (Quality), Martyn Diaper. The ‘toolkit’ uses what happened to LB in a tasteless and completely pointless way (there ain’t an awful lot to learn about people with epilepsy and the dangers of bathing after all) and is crap throughout. But hey ho. It’s going to be launched at the Sloven quality conference in December…. 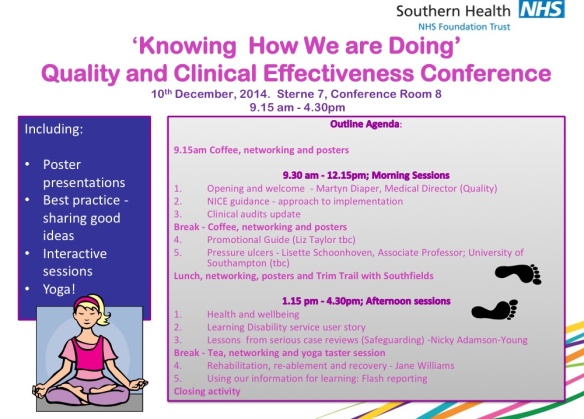 (Bit of an aside really, but judging from the programme and title, you’re doing pretty shit really. Not sure you need to set aside a day to discuss it.)

I assume Could it happen here is being ‘launched’ in the learning disability service user story session.  Sickening to think someone will stand up in front of an audience and present this pile of offensive crap. For so many reasons. Not least because LB wasn’t a ‘learning disability service user’. He was dearly loved young man with his whole life ahead of him.  And nothing went fucking well. How could you even begin to suggest it did?

Please don’t reduce him to some sub-standard, sloppy case study in a pretend learning exercise, in a shonky little day, top and tailed with yoga and footprints.

Yep. The fuckers are actually thinking of putting in for a BMJ Award.

Setting to one side the seedy, commercial angle to the whole NHS award scam/industry, brilliantly captured this week by George Julian, how.the.hell can a Trust who allowed a fit and healthy young man to, er, die, and who continue to be the subject of a police investigation, even begin to think about awards?

Oh, and one last thing… The Patient Association published a cracking report about the role of the ombudsman andNHS complaints this week. And there, on page 17, (thanks @Minh Alexander) is a terrible story about a young woman let down by Sloven in 2011.

The account could be a word by word account of what we’ve experienced; insensitive and unsafe care, not listening to the family’s concerns and a response from Sloven containing ‘significant errors, omissions, distortions and false claims’.