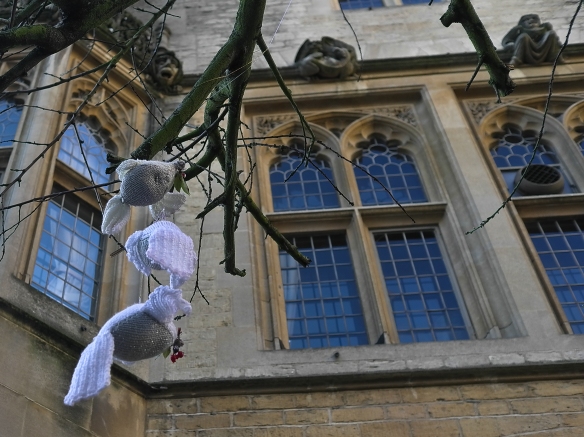 A few reflections as 2014 draws to a close. The #justiceforLB campaign continues to grow. We have collectively generated some noise, discomfort and disquiet around the provision of services for learning disabled people, as well as encouraging joyful contributions, actions and activities from a diverse group of individuals, families and organisations. Heartwarming doesn’t begin to capture the experience of #107days of action and it remains thrilling to look back at those months and re-absorb the enormity of what people did. Seriously. Just legendary commitment and spontaneity.

I won’t rehash the things we have managed to achieve here as they are detailed on these pages and over at #107days, theJusticeforLB advent calendar and LBBill pages but it has been remarkable. (I get despondent about the lack of change but am reminded by Rich regularly that change takes time and we’re taking on an area which has been historically, socially and politically consistently shat upon.) So yeah, we’ve done good.

In contrast to the joy and celebration, Sloven and their merry band of solicitors, Bevan Brittan, continue to occupy the dark side. A (publicly funded) festering, stench ridden space in which they hatch nasty little plans that appear to be designed to try and crush us. Drawing on deceit, delay, non disclosure and offensive arguments. (It could be so, so different…)

The then head of NHS England, David Nicholson (love him) said to us back in March that Sloven would be advised not to contest the inquest. I mean leaving a young dude with known increasing seizure activity to bath without supervision in hospital is so off the scale of wrong I still can’t comprehend it. But nah. Sloven and the BB’s (or the Slevan B’s) submission to the coroner a few weeks ago included the argument that LB shouldn’t have a jury inquest because drowning in the bath is natural and non violent. Not only is this argument beyond distressing but c’mon weasels, you can’t possibly publicly accept that LB’s death was preventable and then argue that it was natural. Why? Just why?

Anyway, leaving that miserable happening on the pile of numerous other Sloven related miserable happenings, I’ve been thinking quite a lot about the campaign recently. Partly because of the #hairhack workshop George Julian and I did in Liverpool a few weeks ago. We tracked back through old emails to work out how the campaign got off the ground and had a right old chuckle at the ad hoc, almost random way things unfolded and developed. But underpinning this chaos were some core ingredients that may be necessary for a cracking social media campaign: commitment, energy, passion, creativity, humour, a range of varied skills to draw upon/crowd source, cheek, fearlessness, and no vested interests.

This list is up for discussion but I can’t help thinking the latter is possibly key. And what stymies the chance for actual change too often. Once you’re sucked into, or part of the system, it’s game over really. I can imagine that we’ve been a real irritant to various people/organisations over the past year. Pretty irrepressible, annoyingly and relentlessly buoyant in the face of some shite knocks (and I ain’t talking about LB’s death here), continually shining a light at little known practices, structures and processes, and not for buying off, distracting or deflecting.

And that brings me back to George Julian. While the campaign is and always has been a collective endeavour, George’s involvement deserves particular recognition here.

After a bizarre, work related, unremarked upon twitter thing about five years ago, George and I hooked up on twitter after LB died. And she became the central force in the campaign. I can’t (and almost don’t want to) imagine how many hours she has devoted to campaign activities from various parts of the world, with dodgy internet connections or exhaustion creating time differences. She has been consistently encouraging, thoughtful, creative, organising, planning and chivvying. With cheerfulness, enthusiasm and sensitivity. George has a legendary capacity to both deliver and keep things moving, even in pretty intense situations. She has added a level of sense checking, realism and balance to the campaign (while at no point suggesting a toning down of howling, desperate rage/swearing). As Mark Sherry commented on facebook yesterday; ‘I’m so impressed by her kindness, solidarity, principles and commitment.’

This, together with a cheerful readiness to break rules where necessary, make her the ideal type informal, radical, campaign manager. And she does it all, as the campaign has been from the start, for free.

So here’s to George Julian (sorry, you will always be George Julian in our gaff). And here’s to a new year. To changing the law and challenging the complete shiteness that continues to coat so many lives. And to getting justice for our beautiful dude who was let down in such a horrific and catastrophic way.

I took my camera into town today to snap a pic for this post. Pigeons featured again. And more guerilla knitting…

Patterns. There are always patterns.