The CQC Sloven inspection findings published today are something that demand careful reading. Remaining mindful of the amount of behind the scenes preparation and coaching that goes on for these inspections.

We heard of many new initiatives and the trust was continually looking for ways to improve. However it was clear that time was needed to fully realise the scale and complexity of the changes and embed these across the trust.

Mmm. The bar clearly set so blinking low from the off. Businesses can have teething problems expanding, take-overs and the like. Mistakes can happen. For trusts those mistakes have high stakes. Like LB’s life. [He died?]

Growing so big, so fast and spreading yourself so thin across a wide geographical area inevitably ain’t going to work well. As the report today illustrates.

And a startling number of issues identified in previous CQC inspections in Oxfordshire that still occur. The stench ridden “Always about to…” model very much alive and kicking still in Sloven Towers. ‘Point a CQC inspector at us to show us the right route and we’re on it‘ jibberjabber spewing like vomit from a carsick toddler.

There’s some positive stuff I’m not going to record here. The positive stuff is people doing their jobs properly. Good. But not remarkable. The above list, combined with previous CQC inspection findings should lead to action. Not nonsense ‘learning fluff’ spouted by Sloven execs but real action. This bunch of muppets clearly should not be running an empire of crappy healthcare provision across four or five counties.

I worked at home today. Unexpectedly. And the phone didn’t stop ringing. Various people asking for thoughts about the report. There have been some cracking responses (in addition to the now legendary local news coverage). Andy McNicoll at Community Care and Chris Hatton’s contributions are stand out moments.

But hey, what about the Slovens? How have they responded to a grandly piss poor review of their services? Particularly  given their obsession with awards and all things shiny?

In a typical Sloven way. 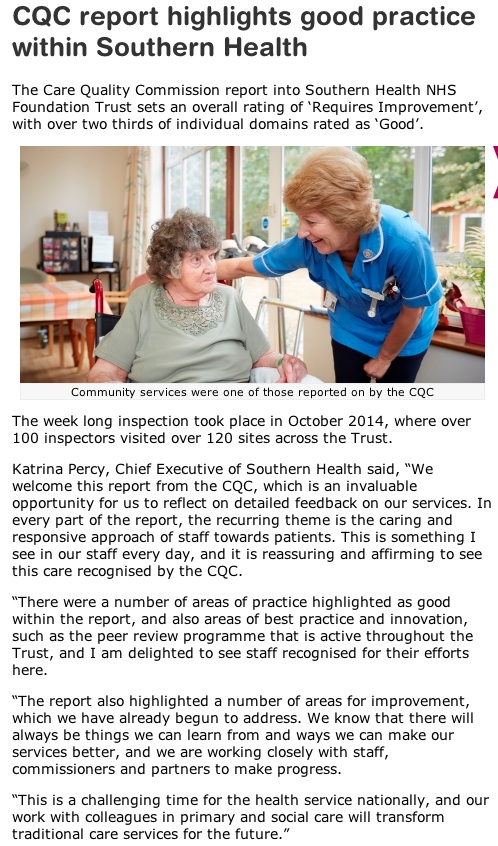