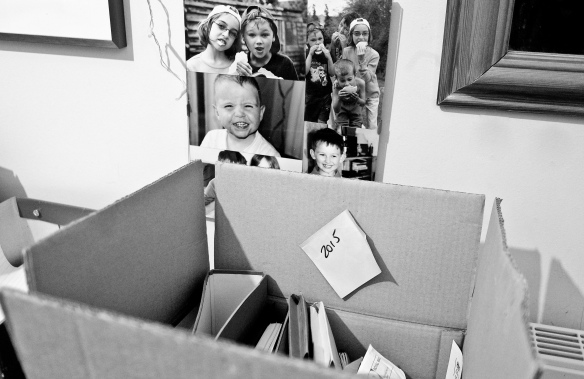 Forced back to the cardboard boxes of records/letters/reports stacked up in what was going to be LB’s bedroom this evening. I have to provide evidence to support my witness statement for a disciplinary council investigation. I gave the statement on Monday. Another annual leave day spent doing stuff so awful I’d rather grate my finger tips, sprinkle them with a mix of lemon juice and chilli, and sift through a vat of day old vomit separating out the chunks. But hey ho.

The road to accountability is a completely unnecessary and inhumane process when public bodies are involved.

The interview was thorough and searching. Deeply, deeply saddening and distressing. Re-living the horror of what happened [he died…???] but also reflecting on how the whole happening was simply a disaster waiting to happen. So many big and small craphole pieces in place.

Tonight the evidence. Grated finger tips and sick sifting again appealed but ain’t an option. Sadly. If we want any accountability for what happened, the catastrophic unfolding of something that turned out to be so bleedingly obvious has to be revisited. And then revisited. In heartbreaking and harrowing detail that will, eventually, become public.

I’m halfway through the task. After the way in which OCC responded to the ‘factual inaccuracies’ I raised [she said but we don’t believe her because it ain’t in our records…] I’ve developed a new system which involves screen grabbing relevant sections as well as referencing them. Creating a form of collage artwork. A word document of colour, shape and heartbreaking content. My word is clearly meaningless without ‘real time’ evidence. Southern Health NHS Foundation Trust* and OCC can record whatever they like, or choose not too, and it counts as ‘fact’. We have to show original workings where they exist. Deeply unfair and discriminatory but being discredited and discounted is now a familiar experience.

At least I can record this toxic process. With space here and on other online platforms, and the writing tools to make it visible. The attempts to discredit we’ve experienced so far are pretty shocking but LB and thousands of dudes like him are simply disregarded. No space, no platform, any tools to communicate ignored/crushed… lives extinguished or ruined through neglect, disregard and worse. Discounted in life and death. A sustained form of blatantly ignored eugenics. Acted out in full view.

Vat of vomit anyone?

*I’m reluctantly ditching ‘Sloven’ on this blog because they are so fucking focused on their reputation proper name checking is probably sensible.  Sigh. I had no idea this would be so blinking hard.