A minor Mazars related scandal emerged last night on twitter. Most of the doubters and deniers of the Mazars review have faded away in the light of the clear evidence the review outlines. The belieSHers have disappeared. Hard to really keep believing in a Trust with such serious failings at board level. Sigh.

Turns out an apparently random denier was still spluttering about the rubbishness of the review in a convo involving Alexa Wilson, Gallus Effie and Mark Neary last night. Super sharp sleuth Alexa worked out this laddy was the son of a Sloven Board Member, Malcolm Berryman. Adding in a good dose of comedy. (One of the reasons why I love twitter). 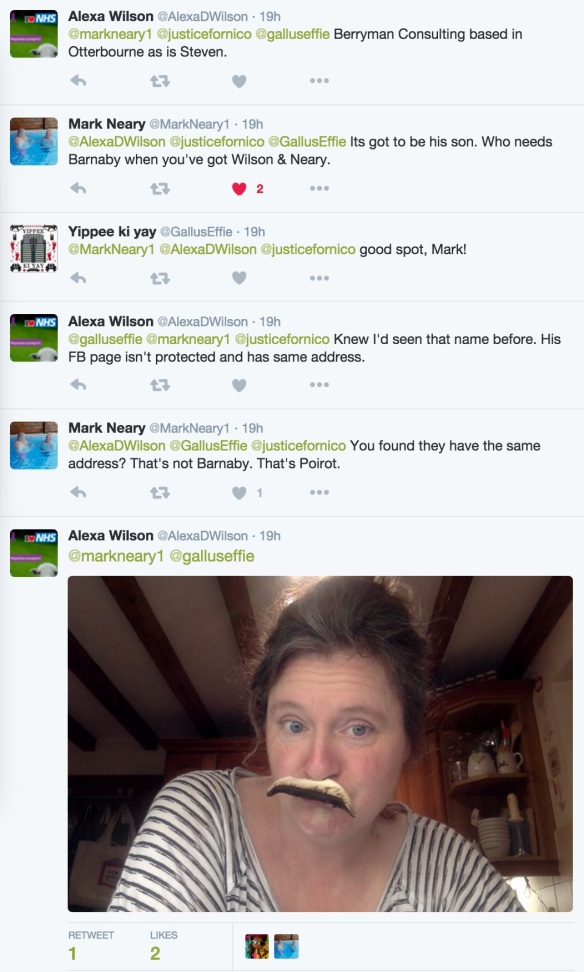 I was reminded of the story of LB on the bus with my dad… Berry Berry serious indeedy. This morning I tweeted about the connection and got the following response:

After a few more tweets, he said sorry (a bigger surprise than the original tweet) but kept up a bit of anti Mazars banter. Of course twitter allows no stone unturned and it soon emerged that baby Bezza had been challenging the content of the review before it was in the public domain. Ouch. Once that detail started to spread, he locked his account so his tweets were no longer public. When Rupert Evelyn, from ITN, joined in, the account was deleted.

Looks like the Sloven surveillance team put in an urgent call to Papa Berryman alerting him to his son’s actions.

Joking aside, this tale captures so much of the problems we’ve seen over and over again with the Sloven muppets:

Poor governance, poor communication, poor judgement and consistent social media failure. Arrogance, contempt for families (other than their own), rudeness and an inability to understand, at any level, what is actually important here. [Howl].

Board members’ children or other relatives should not be given sight of confidential draft reports and discuss the content on social media. [A small part of my brain is thudding as I type this… I almost, still, cannot believe the crap I continually recount on these pages.]

The board, and Katrina Percy, need to go. Jeremy Hunt needs to put his money where his mouth is and sort this shambles out. People’s lives are at stake.

19 thoughts on “Berry berry serious and another board failing”