Still waiting for a reply to the letter I fired off to the Sloven governors at the beginning of the year. (Governors of NHS Trusts hold the non executive directors to account for the performance of the board and represent the interests of the public.) In a brief moment of optimism and with a ‘it’s a new day’ sort of (short lived) feeling. First post of the year in fact. It still took hours, and plenty of tears, to write. Silly me…

There is a complication for the Sloven governors, though. The thorny, triumvirate issue, raised at the extraordinary board meeting in January by a member of the public. He asked the question;

When will this Board purge Southern Health of the pernicious influences of Hampshire Community Healthcare?

There was no answer to the question of course. The board chair is also chair of the governors and one of the pernicious influences referred to. What are the Sloven governors to do? Step up robustly and represent the interests of the public? Or coast along ‘performing’ governorship for an easy life? I dunno. I’ve no idea why people choose to become governors or what the selection process is. Is it CV boosting? Altruistic? Fodder for showing off to family, mates and colleagues? An intention to improve practices?

Whatever, the Sloven bunch are dropping like flies caught behind sun ridden glass with a stinking carcass. Over a third of posts are currently vacant: 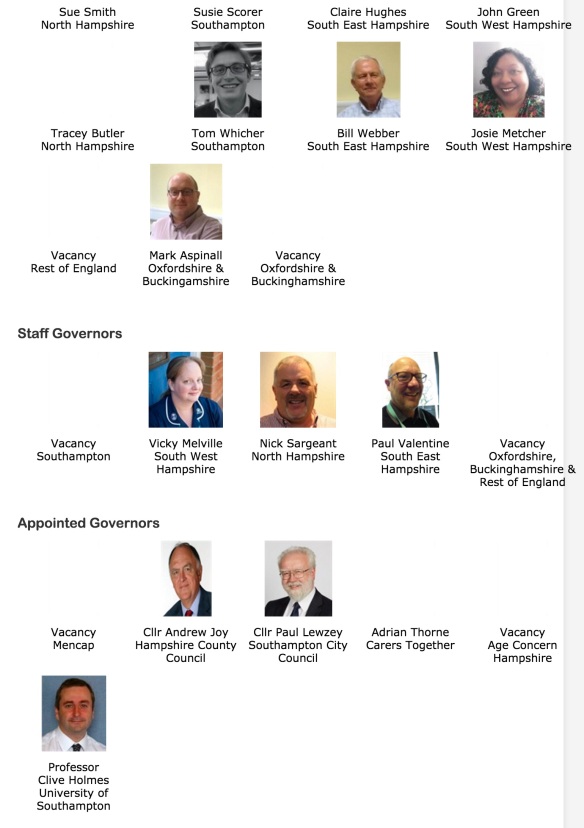 Mencap dispute there ever was a Mencap governor but Sloven insist on a Mencap vacancy remaining. Oh, and (at least) one of the Staff Governors has blocked us on twitter.  Awkward, awkward, awkward*.

We’re moving offices tomorrow. I spent much of today packing. It was pretty upsetting as I kept coming across stuff about LB. Mostly official stuff; applying for benefits, core assessments from the pre-transition social worker [howl] and some more cheering #107day bits. I came across this envelope which had a key inside. No other info.

I packed it with the rest of the stuff despite strict instructions to downsize for the new building. I’m a bit of a hoarder but couldn’t help thinking we’ve more chance of finding out what door this key fits than answers to anything else relating to LB. It’s all so deeply, deeply wrong.

*For anyone thinking it’s wrong to name and shame the Sloven guv list here, these are public posts. LB died an unspeakable death in unspeakable circumstances. We all know this. I’ve not named (or blamed) staff below consultant level on this blog (not sure I’ve even named consultants but can’t be arsed to check). Until people who take on roles that involve holding people to account actually step up and act, crap all is going to happen. People will keep dying or experiencing barbaric and inhumane lives. I hope to receive a response to my letter from the remaining Sloven governors soon.

In the meantime, if anyone recognises this key and know what it unlocks, let me know.

14 thoughts on “Reservoir guvs and a random key”