Oh dear. Andrea Sutcliffe, Chief Inspector of Adult Social Care at the Care Quality Commission, has written a blog that makes my eyes repeatedly blink. And my brain slowly and repeatedly turn and churn. Chucking me back to days of car sickness and towel caught vomit on the back seat of a Ford escort. Here’s a walk through…

Writing about the Panorama programme shown this week documenting abuse at a residential home run by the Morleigh Group. [I’ve not watched the programme. I need to develop guts of steel to do so.] Sutcliffe is both defensive and distancing in her ramblings.

She kicks off in the first paragraph with the statement “We warned [in a report] that adult social care is approaching a tipping point…” Mmm. A better start, given the content of the Panorama programme, might have been something along the lines of “I’m horrified that such abuse continues to happen in care provision in the UK, despite our continued efforts… We clearly need to do better.”

And continues: “The Panorama footage was not shared with the CQC in advance so I watched like everyone else.”

Blimey. Not sure what the point of this statement is but it doesn’t half ring some serious ‘queen of the land’ bells. A moment or two of self reflection (or a good mate to pull you up on these developing tendencies) might be in order…

Sutcliffe found that “two moments in particular made me despair”.

Phew. It wasn’t that bad. Only two moments. Allowing reference to the mum test.

“That could have been your mum or mine…”

This was followed by a remarkably weak defence of CQC actions around the Morleigh Group:

“these are services we have been worried about for some time; we had kept them under close scrutiny, inspected regularly and set out what they needed to do to improve through our reports and enforcement action”.

‘Worrying about’ services you know to be failing really ain’t a robust defence. And, clearly, close scrutiny and regular inspections aren’t working. These are people’s lives. A fact that an entire gamut of senior NHS bods apparently still do not get. I ‘worry’ about getting to a meeting on time. About meeting funding deadlines. Not about people (residents) being brutalised.

There’s a muddled and confusing tale of inspections before and after receiving info from Panorama and the (necessary) identifying of “a serious decline in quality”. The CQC never at fault. Failing services brought to public attention by the actions of public and/or journalists have typically ‘just declined’ between news breaking and the previous inspection. Removing any need for scrutiny of the inspection process and what might be missing in terms of identifying failing practice the first time round. Before people are brutalised. Or worse.

The CQC role section is a cracker. Beginning with unqualified condemnation of the Morleigh Group. Of course. The responsibility lies with them.

Then the bizarre statement ‘But it is not unnatural when dreadful things happen in the sector’. ‘Unnatural’?  Eh? How far have senior CQC staff become detached from reality? 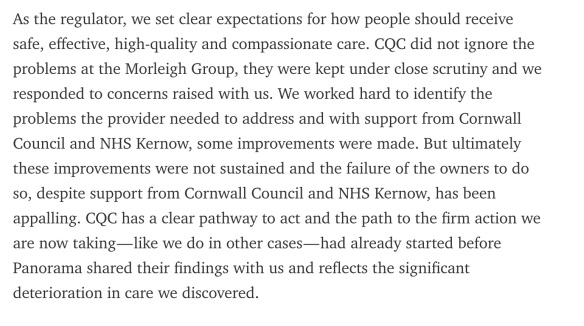 Setting clear expectations? They were kept under close scrutiny? Sigh. The Morleigh Group failed. The CQC failed. There is no wriggle room. Bleating about working hard while failings continue is deeply offensive (and makes utter mockery of the mum test).

Sutcliffe continues to dig a deeper hole. Including an extract from a ‘fairy tale’ letter from a punter which rings even louder alarm bells about CQC processes.

‘I think I should give you a resident’s viewpoint…’ ‘Recovering from the shock’? ‘Right the wrongs here… ‘ Eh? Really? I’m trying and failing to imagine the concerned ‘resident’, sitting in her bedroom, pen poised, reflecting on how much better life is now staff no longer do ‘wrongs’ to her and other ‘residents’. Nah. I can’t.

The overall message of this ill judged post: it wasn’t the Chief Inspector of Adult Social Care or her CQC kingdom what done it. The failings lie firmly with the provider. [And we all know, sadly, they ain’t an outlier.]

10 thoughts on “The CQC, Ford escorts and failings”