This post builds on Five tribunals and a dress code. Sadly.  A few weeks ago I had a three hour (yes, three hour) interview with General Medical Council lawyers. This grilling (they warned me in advance it would be) involved a barrage of questions in tortuous, micro detail.

It was grim. Documentation (and this blog) had been mined for any inconsistencies.

As I’ve banged on before, staff have legal representation at these tribunals and these barristers can ask anything they want of witnesses. Witnesses (including bereaved families) are not allowed representation. During the interrogation, in a hotel meeting room in North Oxford, I scrawled this: 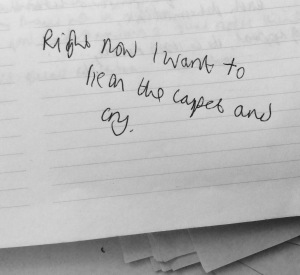 I went home afterwards, instead of to the work meeting I was supposed to attend.

This morning the Nursing and Midwifery Council (NMC) called to update me on the six nursing tribunals due to be held this summer/autumn. A preliminary meeting was held last week apparently and the independent chair agreed to:

Apparently the NMC opposed this delay but staff representatives disagreed with a possible January 2018 date.

So, another year and another tribunal to dread. The brutality of forcing us to revisit what happened for at least another 12 months.

We had no one at the meeting to draw to the chair’s attention the utter inhumanity intricately woven into this process.