On Monday Sloven pleaded guilty to the HSE (Health and Safety Executive) charges. It was a short hearing. The district judge referred the ‘case’ to Oxford Crown Court for sentencing. He stressed it was important that time was factored in for the crown court judge to carefully read the papers and for a full day to be scheduled for the hearing. He was deeply kind and sensitive, recognising how awful and serious it was that LB died. He made a point of acknowledging our family (my mum, sister Agent T and Tom attended).

We met with the HSE and their barrister, Bernard Thorogood, before and after the hearing. They explained the process and answered questions carefully and thoroughly. At the end they went to let the various press (including the BBC and ITV) outside know we didn’t want to be interviewed. We’d been filmed walking into the building.

They’re still outside. I’m sorry but we can’t do much about it. If you’re prepared to stay till 5pm or so they may have given up and gone… A bit of advice is to try and keep a fixed expression on your faces when you leave.

We grimly walked out of the Banbury Magistrates Court and passed the gaggle of journalists and camera people.

They put their cameras down.

It was an unexpectedly moving day. With the kindness and respect shown by the judge, the HSE and Bernard T, the media. Julie Dawes, Sloven CEO, attended.

The hearing date has yet to be set but will be in the next few months, possibly early January. Bryan, the My Life My Choice coordinator, emailed this afternoon:

The trustees want to attend on mass (probably 12-15 people) Oxford Crown Court for the SH sentencing.  They wanted to know how you might feel about this rather than them just turning up unannounced.

What do we feel? What a bloody brilliant  idea!

Let’s make it big. Let’s make it colourful and let’s mark this milestone in the lives and deaths of learning disabled people in typical #JusticeforLB chaotic and love coated fashion.

Who knows who may turn up. 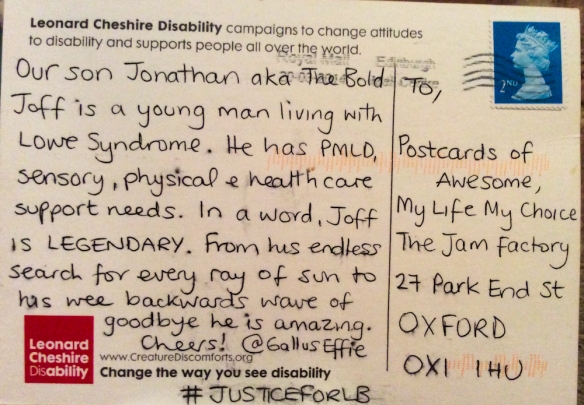 10 thoughts on “They put their cameras down”