I’m stripping this post back to the minimum in an attempt to try to help Jim Mackey, Jeremy Hunt and others understand the gravity of what was/is happening here. Screen grabs, minimal text and links.

Going back to 2011 when the CQC found major concerns at a Sloven run mental health unit, Antelope House, after the death of Michelle Connor.

In response to this inspection, Percy pitched up to a Hampshire and Southampton Health Overview and Scrutiny Committee Joint Meeting to answer concerns. She typically dismissed the seriousness of the inspection report. The deeply inappropriate ‘we’re no worse’ excuse dragged out five years later when the Mazars review was published:

And went on to state:

Overall, a shift in the culture of the organisation was needed, and bad practices of the past needed to be left behind.

Bad practices of the past, eh? A set of responses were presented, summarised here (worth reading in full if you can bear to):

Recommendations that have been regularly and repeatedly ringing ever since. With each death and inquest. Oh, and there was the usual evidence of the (Percy) Sloven way. A focus on ‘awards’ and glitziness to distract from the serious issues.

In the meantime, Sloven took over the Ridgeway provision in Oxfordshire. Apparently experts in mental health and learning disability provision (despite all these experts having left in the previous year or so). Ms Percy was huffing her puff and stuff online, regardless.

Once the lucrative contract was signed, Sloven withdrew from pretty much any engagement with the Oxon services. The white noise they talked about in the 2011 meeting didn’t translate into action. Just words to appease vaguely interested audiences. The 12 hour urgency type stuff was fakery. The exec never took the very obvious health and safety failings seriously. And haven’t since.

Here we are. Five years on. Deaths. More deaths. And closure. 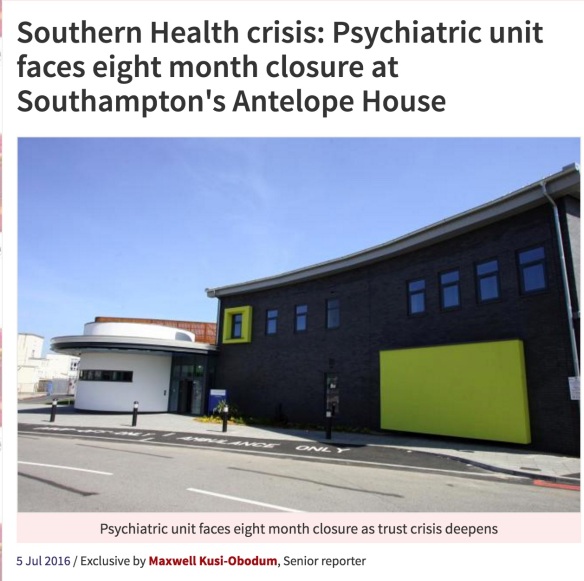 However, Southern Health did not believe that the areas requiring improvement were of a serious nature, and were not of the scale seen on recent documentary programmes (e.g. Panorama programme on Castlebeck). [2011]

Our beautiful, beautiful boy. A life (one of many) snuffed out because the Sloven exec (and those who should have been keeping watch from above) simply didn’t.

There was a ruling yesterday by the judge in the horrific Alton Towers crash case. So much resonates here.

Sloven’s catastrophic failure to assess risk, woefully inadequate safety procedures, failure to communicate and being a shambles explains why LB, and so many others, died. Well, with a hefty dose of arrogance, an obsession with reputation and awards, and stupidity. Typing this through a now familiar waterfall of tears and rage, I don’t understand why we are still fighting. Why people are spending their time digging through this shite, committed to exposing the grubbiness that is publicly available, when so many are paid to do so and don’t.

If anyone from NHS Improvement, NHS England, the Health and Safety Executive or Department of Health (well anyone, really) could explain why we still have no answers or accountability over three years after LB’s death, please do.

This is state sanctioned cruelty.

2 thoughts on “Antelope House and those old tear waterfalls”