Another day, another shower of Sloven related shite. The (one hour) Sloven extraordinary governor’s meeting next Tuesday has been ‘transformed’ [painted a different colour] into a set of observations by pretty much everyone other than the caretaker and cleaners who I suspect would have more sensible and insightful reflections than the newly appointed interim board chair, improvement director, nursing director, CEO and two other random peeps listed on the agenda. The emergency motion that generated the meeting has been pushed to a secret session after public questions. Within the one hour meeting.

Beyond unacceptable. And so disappointing from Tim and the Turnaround Team. Big sis, Agent T, texted this morning in frustration to say ‘I don’t know why they surprise us every time. I think there must be a hint of not being pushed (or seen to be pushed) by some pesky families…’ This echoes Tom saying

The ridiculous thing about all of this is that when I look at what families demand from Southern Health and the way that they just don’t change I sometimes worry that maybe we are asking a lot or being unreasonable. But then I list the demands of the families and they shouldn’t even be demands, they are such basic requests that if asked on behalf of any other group in society would’ve been dealt with straight away with no barriers. So why does it take so long when it’s for those with learning difficulties?

Agent T and Tom are both right. We ain’t being unreasonable or pesky. We’re calling a failing trust out. Repeatedly. With enough evidence to sink a Sloven flotilla. Sloven, meanwhile, have shown no signs of recognising/acknowledging failings. Tom captures this brilliantly in his post.

We’ll be heading to the Lyndhurst Community Centre on Tuesday for the unfolding of the fake governors meeting. Meeting My Life My Choice champs at Oxford station, picking up Agent T and Ally Rogers en route and hooking up with George Julian and others somewhere in the New Forest.

I just hope there’s a good spot for a picnic after and a bit of sunshine. Sounds like we’ll be booted out sharpish.

In related news, My Life My Choice received a second mysterious letter recently. Written to then board chair, Simon Waugh, in May 2014. Copied into Monitor and NHS England. Wonder if they will be there on Tuesday?  I’m sure we’ll have enough egg sarnies and a flask of tea or two to share… 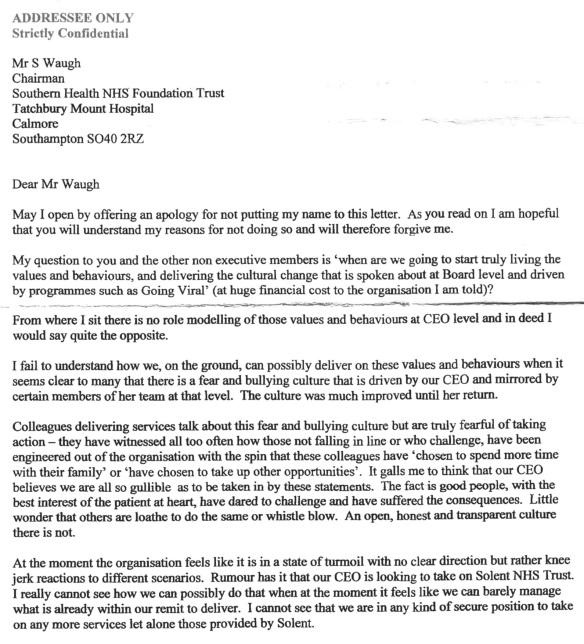 6 thoughts on “‘Painted a different colour’ and the picnic spot”